Thanks to everyone who participated in the recent Power Off Weekend!

Figure 1 below shows the results for campus wide electricity consumption during the Power Off Weekend compared to the average consumption recorded each Saturday and Sunday in 2014 prior to the Power Off Weekend . Savings in excess of 4,000 kWh and 3,600 kWh were recorded on Saturday and Sunday respectively. This equates to an overall reduction of 8% compared to an average weekend in 2014. 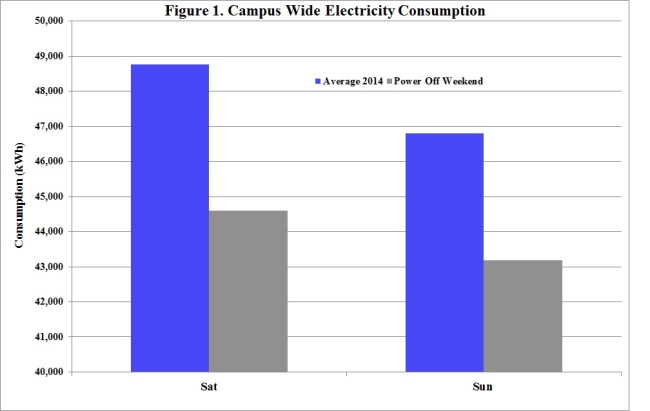 To put this in context 7,600 kWh would be sufficient energy for 144 days of non-stop vacuuming on full-power using the Miele S8320 vacuum cleaner pictured below.

Figure 2 shows the performance of the South Bank over the Power Off Weekend compared with average 2014 consumption. Savings of approximately 3% (i.e. circa 2,000 kWh) were recorded over the period.

Figure 3 shows a combined reduction of 22% (i.e. 5,700 kWh) over the weekend for the North Bank over the Power Off Weekend.

This entry was posted in Uncategorized and tagged Energy. Bookmark the permalink.